The Adventure of the Reigate Squires 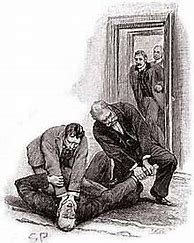 The Adventure of The Reigate Squires Watson tells us takes place in April 1887. It is one of 11 Sherlock Holmes short stories in The Memoirs of Sherlock Holmes and was first published in The Strand Magazine in 1893. It was originally entitled ‘The Adventure of the Reigate Squire’ but an ‘s’ was added when the compilation was issued. Holmes is taken to recuperate from his European exertions in the Baron Maupertuis affair to the home of a former patient of Watson’s, Colonel Hayter, near Reigate in Surrey. In spite of being there only to recuperate he becomes immersed in investigating two nearby burglaries in imposing residencies. In the first, at the home of Mr Acton, items of no value were stolen. But in the second one, at his neighbours the Cunninghams, their coachman was killed but nothing appears to have been stolen. Holmes investigates and establishes the culprits proving that the most respectable members of Society are not above the law.