The Adventure of the Veiled Lodger 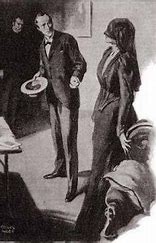 Watson ascribes this to late 1896 but admits he has ‘slightly changed’ the name and place. The story was published in The Strand Magazine in February 1927 and is one of the twelve stories contained in the compilation ‘The Casebook of Sherlock Holmes’. It is one of the least well-known stories and this may be because there is no mystery to solve – the ‘Veiled Lodger’ of the story tells Holmes and Watson what happened on their first meeting. Locked into an abusive marriage she and her lover conspire to murder her husband, the circus owner Ronder. The lover, Leonardo the Strongman, fashions a club to kill Ronder which he has designed to resemble a lion’s claw. They plan to let the circus lion out of its cage in the belief that everyone will think the lion killed the circus owner. Although Ronder is killed, the lion attacks the woman whose face is horribly mutilated. It is only on hearing of Leonardo’s death and her own illness that Mrs Ronder, the Veiled Lodger, decides to break her silence. Watson’s ‘slightly changing’ the names of the places – he states the murder takes place in a fictionalised village called Abbas Parva in Berkshire- in addition to his lack of details as to where Mrs Ronder is lodging (all we know is it is in South Brixton) makes it impossible to provide any site locations.