The Adventure of the “Gloria Scott” 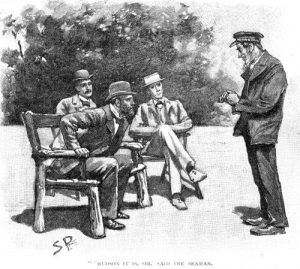 “The Adventure of the Gloria Scott “, published in 1893 is one of the 12 stories in the cycle collected as The Memoirs of Sherlock Holmes. It is chronologically the earliest case in the Sherlock Holmes canon and takes place when Holmes was still a university student-approximately 1874. Because of this the story is related mainly by Holmes rather than Watson. It is the first case to which Holmes applied his powers of deduction. Like the Dancing Men the story is based in Norfolk and also involves cracking a code contained in a mysterious letter which in this case leads to the death of the father of Holmes’ university friend Victor Trevor.

The story is set at Squire Trevor’s house at “Donnithorpe” which Conan Doyle describes as “a little hamlet just to the north of Langmere, in the country of The Broads. Although there are two small villages called “Langmere” in Norfolk neither meet the requirements of the story. Modern scholars believe ACD uses “Langmere” in the context of simply “broad water.” Bernard Davies, by use of train timetables and matching the times at which the sun set, pinpointed the location as being in the North East and South Eastern area of the Broads approached via Great Yarmouth Railway station. The two prime candidates are Horsey and Rollesby Halls located within 20 miles of each other