The Adventure of the Mazarin Stone 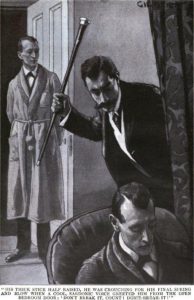 The Adventure of the Mazarin Stone has been deemed to take place in the Summer of 1903 (Vincent Delay: Holmes and Watson – a new chronology of their adventures). As such it is the last of Holmes’ adventures to be recorded before his retirement. It is one of 12 short stories in The Case-book of Sherlock Holmes and was first published in The Strand Magazine in 1921. Watson, who has not seen Holmes for some time, visits him in Baker Street where he finds him involved in trying to recover the great ‘Crown Diamond’ or yellow Mazarin stone, the loss of which will cause a national scandal. The stone has been stolen by Count Sylvius and his accomplice Sam Merton. Holmes believes Sylvius intends to murder him and has had a bust produced to serve as a decoy. Sylvius does visit Holmes with murder in mind. Holmes eavesdrops on Sylvius’ and Merton’s conversation and their plans for its disposal and by a sleight of hand recovers the stone. The story is significant for a number of reasons. Most of the action takes place inside 221B Baker Street. It is one of only two of the stories in the Canon written in the third person. Thirdly, it was first written by Arthur Conan Doyle as a play called ‘The Crown Diamond’ with the villain Colonel Sebastian Moran not Count Sylvius. When Doyle  wrote it as a story he alluded to the air gun used in ‘The Adventure of the Empty House’ where Moran is featured as the villain. Leslie Klinger suggested the story got its name from the Mazarin diamonds, a collection of 18 stones bequeathed to Louis XIV by his chief minister, Cardinal Mazarin.