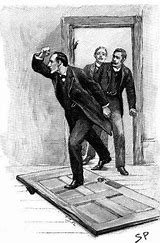 The Adventure of the Stockbroker’s clerk is dated to 1888 or 1889, shortly after Watson’s marriage. It is one of 12 short stories in The Memoirs of Sherlock Holmes and was first published in The Strand Magazine in 1893. Watson is visited by Holmes who asks him to accompany him and his client Hall Pycroft, a stockbroker, to Birmingham. Hall Pycroft had been made redundant when his previous employers Coxon and Woodhouse collapsed. After much endeavour he obtained a post at the renowned stockbroking firm of Mawson & Williams only to be approached by a Mr Pinner, acting on behalf of his brother, who is looking for capable staff to manage his company, the Franco-Midland Hardware Company Ltd, headquartered in Birmingham. The salary offered is much higher and a substantial advance is paid. However, having visited the offices in Birmingham. Hall Pycroft is suspicious and asks Holmes and Watson to investigate. Holmes concludes that Hall Pycroft is being enticed away from the Mawson & Williams position in London, but why? In this the story draws on the previously written story of ‘The Red Headed League’ and Doyle will use the same principles in his later story, The Three Garridebs.