The Problem of Thor Bridge 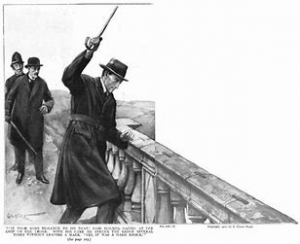 The story takes place in October but there are different views as to the year -1883, 1885-6, 1894-1898 and 1900-1901 have all been offered. The story was published in The Strand Magazine in February and March 1922. Holmes and Watson are approached by Neil Gibson, the greatest gold-mining magnate in the world to prove the innocence of Miss Grace Dunbar, his children’s governess to whom he is attracted. She has been accused of the murder of his wife which took place on Thor Bridge which crossed a lake in his grounds. The circumstantial evidence appears damning…