The Adventure of the Three Garridebs 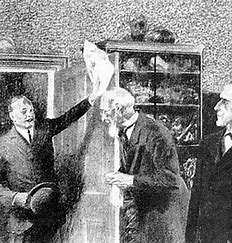 The Adventure of the Three Garridebs is dated by Watson to June 1902. It is one of 12 short stories in The Case-book of Sherlock Holmes and was first published in The Strand Magazine in 1925. Watson intriguingly opens with his view of the case ‘It may have been a comedy, or it may have been a tragedy’. Holmes and Watson are visited by an American, Jonathan Garrideb, who has located another person with his unusual surname, Nathan Garrideb who resides at 136 Little Ryder Sreet, London. If they can find a third adult male Garrideb they will all receive a share of the late Alexander Garrideb’s estate woth £5 millions each. Nathan Garrideb, to Jonathan’s annoyance, wants Holmes to find the third Garrideb. This seems to be unnecessary as later Jonathan finds another Garrideb, located in Birmingham, who he tells Nathan Garrideb to go and meet. But nothing is as simple as it seems, and Holmes concludes that this is a ploy to entice the reclusive Nathan to leave his home. In this the story draws on the story of ‘The Red Headed League’. For Watson. It will prove to be a bloodier experience than the previous story.